Did you know that Glenelg spelt backwards spells Glenelg? The bay as it is known to the locals of Adelaide, Glenelg is home to South Australia’s best beaches. It’s not only the beautiful white sands and blue oceans that make the beaches so spectacular, it’s also all the cafes and restaurants. The Stamford Grand which overlooks the jetty and beach is very popular for tourists to spend the night or even the weekend, offering live music and a fantastic front bar along with in house restaurants. 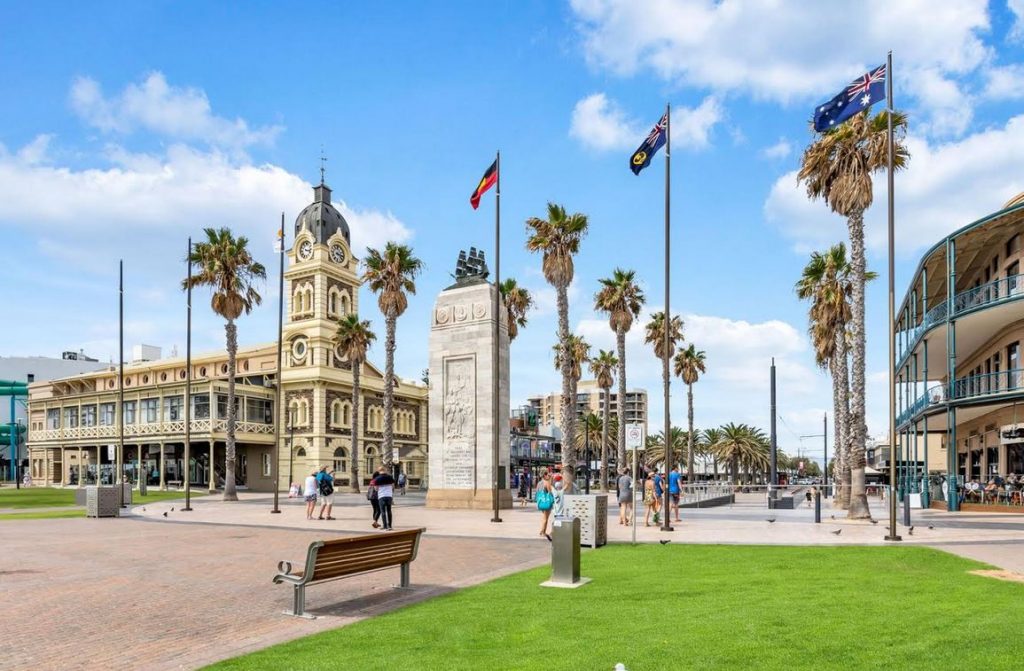 As the hot water specialists of Adelaide, we know the Glenelg area better than any other company in SA. Whether it be Glenelg North or Glenelg East we have all types of hot water tasks covered. Glenelg, South Australia, 5045

The first British settlers set sail for South Australia in 1836, several locations where considered including Encounter Bay, Kangaroo Island and Port Lincoln. Located in the council district of Holdfast Bay, Glenelg was established in 1836 and is the oldest European
settlement on mainland South Australia.

The iconic Glenelg jetty was first constructed in 1857 at the end of Jetty road. During its life it has seen many alterations such a multiple lighthouse, a police officer shed and an aquarium. In 1948 a freak cyclone hit the Glenelg and it was deemed unsafe and dismantled. The local council immediately began plans to have a second jetty built and today it still stands at the end of Jetty road. Over the past years there have been many discussions about the proposal of having a hotel constructed at the end of the jetty. The holdfast bay council have produced many models, but none have yet to come into fruition.

Being such a hot spot for tourists it’s no wonder our plumbers are kept in work, day and night 7 days of the week. Offering emergency plumbers in Glenelg allows many of the hotels, pubs and restaurants to keep operating while we fix there broken hot water services, leaking taps, burst water pipes and even the occasional blocked drain lines.

The proximity of many properties to the ocean can put a strain on the property’s infrastructure. Hot water services in particular should be installed with stainless steel cylinders and continuous flow water heaters using heavy duty heat exchangers to cope with the high level of salt in the air. A water services copper pipes and brass valves also have a hard life due to the high level of corrosive air they are exposed to. All these issues ensure we are never out of work fixing issues caused by the ocean.

High demand commercial properties such as The Water Mark, The Holdy, Lights Landing, Oaks Plaza Pier Suites and Marina East will have all of their infrastructure such as H-VAC units, hot water tanks and heat exchange units inside to avoid contact with the external elements.

We typically find brands such as Rinnai and Rheem powering these apartment complexes. The emissions produced from these high demand gas fuelled commercial hot water services will be emitted to the atmosphere via 316 stainless steel flues.

With a quick drive down Anzac Highway entering the bay is very easy. If we are not coming from the city you will probably see us travelling along Tapley’s Hill road from West Beach and Henley Beach or along Brighton road from Seacliff or Somerton Park. Given our large data base of clients in these coastal locations you will find it easy to get a plumber the same day and we are always on call to offer emergency plumbers in Glenelg.

Let our extensive knowledge of hot water be to your advantage and contact us today on 1800 694 689.